how to make the bear

how to make the bear?

Most beer production starts with four basic ingredients: cereals, hops, yeast, and water. Different recipes, different brewing process, the taste of beer will be different, there are currently more than 30,000 kinds of beer in the world.

The assembly line we are looking for today is made by a big factory. It is so large that if you visited the Netherlands, you may have visited its museum.
Malt raw materials
The main component of beer is malt, what is malt? That is, barley sprouts... The method is to soak the grains in water, promote their germination, use their enzymes produced by germination, convert the starch in the grain to maltose, and then quickly heat and dry the resulting product. The solution produced by the dissolution of maltose is what we call Sputum.
Here is to talk about the importance of malt! Because of the malt, the texture and sweetness of the beer is provided, and it also provides the food source that the yeast needs. While mash produces different sugars at different temperatures, each sugar and yeast reacts differently and contributes their unique taste to the beer. Also, like craft beer, it is made of two kinds of mash, and the method is called "fry mash".

To achieve the unique flavor of cellar, the next step is to inject the wine into the ripening tank for a second fermentation, which will increase the composition of the alcohol and produce more carbon dioxide, bringing a more refreshing and stimulating mouth feel.
Filtering
After another four to five weeks, the double-fermented beer has enough alcohol, but the color is still very turbid. Therefore, it needs to be sent to a specially designed wine cellar for filtration to make the wine clear and beautiful. Big jar.

Taste test
The professional winemaker will taste the filtered beer and make a final inspection before sending it to the packaging department. Every bottle of beer must have exactly the same taste. Do not underestimate this link! It looks easy, smells, and takes a sip. Actually they all have gone through years of professional training in order to be able to tell the difference between aroma and taste.

Foam stability
The foam stability of the beer must be measured before shipping. The thickness of the foam produced by the machine is about three centimeters. It must be kept for at least 250 seconds. The unqualified beer will be judged as unqualified by the batch. A batch of production is a mufti-million-dollar cost. Of course, strict production control, but also almost no problem.

Bottled factory
Then it went to the bottling section. Bottling was done with glass bottles. Compared to cans, the glass neither leaked nor reacted with the wine, so the preserved beer would be more stable and more flavorful. The following figure shows that the prepared beer bottles are washed and dried by high-pressure water, and then sent for filling.


Clean before filling, then pressurize the beer, then press the bottle cap. Covered beer can go through the machine's foreign body detection to enter the next link, uncovered will be individually isolated, like the following picture of the bottle ...

The beer was also sent to the sterilization zone at this time, and showered with warm water at 63°C to kill the bacteria and stabilize the beer before it could be stored on the shelf for a few months at a stretch. This kind of operation of first packaging good food and then sterilizing it means that the bottle should be cleaned first, then sealed after being filled with beer, and then killing the whole bacteria once again. As for the possible bacteria, it will be ... all right, anyway, it is dead. Now.

put on label
Then labeled by the label machine! The labeling machine first inspects the parting line of the bottle, determines the location of the label according to the parting line, there is a bottleneck label and a front back label, and the backside label also has a bar code to track the batch of bottles and beer.

High-speed cameras link computers to analyze each bottle that passes through, and detect the location of the tags. The entire process is almost fully automatic. Only when changing the container is it necessary to manually adjust the position of the label and the testing procedure. This process is very suitable for everyone to have obsessive-compulsive disorder to observe with the naked eye...

It is the great way for making bear, it is different way for flour making way.
How can we get the flour by wheat?
It need the milling way. When we get the wheat from farm, we need the be cleaned it before milling.

For the cleaning flow chart, we always use Horizontal Scourer, destoner, high vibrating sieve, plan sieve to clean the wheat.
Steel stainless damper will add water on the wheat. 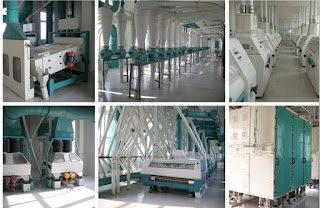 Moisture wheat will be sleeping in the moisture bin(which is better do it by cement).
Then it can go to mill into flour by roller mill. There is semi-automatic and full automatic roller mill. It can process wheat into fine wheat flour, bran and big wheat flour. Then all of them will go to sifter for grading, it can separate the different wheat flour and bran.

九月 04, 2020
The wheat cleaning machines is to add a wheat washing machine on the basis of dry cleaning process. Wheat damper machine is the main equipment of wheat wet cleaning process. It can separate the impurities such as stone, mud block and insect eaten wheat grain in wheat; through washing wheat, it can also remove soil, pesticide, microorganism, insect eggs and other pollutants on the surface of wheat and embedded in the abdominal ditch; it can also increase the water content of wheat. Its disadvantage is that the water consumption is large, the sewage needs to be purified, and the workshop is humid It is easy to accelerate the bacterial reproduction in the equipment, transportation equipment and wheat production warehouse. wheat flour milling machines The hongdefa machinery main advantages of wheat cleaning process are recognized as the main part, which is to remove stones and water. Therefore, when the specific gravity grading stone remover and computer watering machine appeared with low
2 条评论
阅读全文

五月 31, 2018
Welcome to Saba saba Trade Fair 2018 in Dar Es Salaam for maize milling machine In July of last year, we first came to Dar Es Salaam to attend the  Saba Sabah  trade fair  for maize flour mill machines and wheat flour milling machines. Just getting off the plane was attracted by the blue sky and comfortable weather. The friendly Tanzania people make us deeply in love with this place.   Tanzania Tanzania is a country in Eastern Africa within the African Great Lakes region. It borders Kenya and Uganda to the north, Rwanda, Burundi and Congo DRC to the west, Zambia, Malawi and Mozambique to the south, and Indian Ocean to the east. The capital city of Tanzania is Dodoma, the official languages of Tanzania are Swahili and English. The currency of Tanzania is Tanzanian Shilling(Tsh or TZS). Tanzania is considered one of the earliest places in Africa where the earliest Homo habilis inhabited after a 1.75 million years old age fossil was found in Olduvai Gorge. The largest cit
发表评论
阅读全文